Visual and performance artist, Princess Pea, is set to launch a series of limited edition wooden sculptures at the India Art Fair, which is scheduled to take place in New Delhi from 28th to 31st January, 2016. 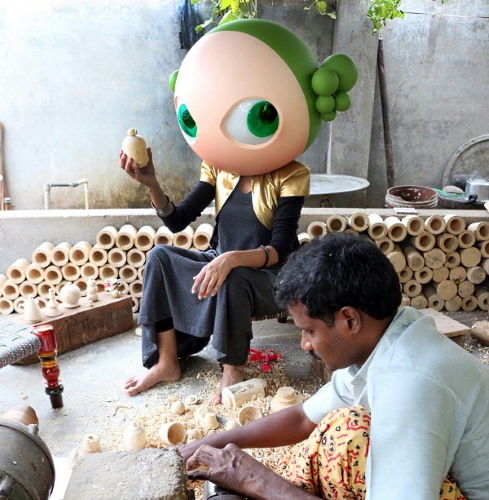 The India Art Fair is set to return to New Delhi for its eighth edition later this month. Among the things to look forward to are the wooden toys from Princess Pea, which will be exhibited at The Design Store. Through her contemporary artworks, Princess Pea addresses international issues of tradition, identity and celebrity with an underlying satire on global societal concerns; presented through a life-size anime style ‘living doll’ that can neither talk, smell or see. The oversized plastic head is the physical representation of the artist’s character. Through her alter ego, the anonymous female artist seeks to challenge our conception of what constitutes femininity and womanhood.

These wooden toys mark the first extension of this artist’s famous trademark character, Princess Pea, which seeks to become a symbolic image of the values and rights of the girl child in India; and addresses the issues surrounding women’s identity in modern day society. The limited edition toy is named “Fall and Rise” and is a figural representation of the Indian girl child who, when pushed collapses but bounces upright once more when released, showing her resilient fighting spirit. By producing these limited edition toys, Princess Pea is not only creating exquisite sculptures, but is furthering her project’s objectives and reaching out to a bigger audience.

The creation of these toys serves also to help sustain the neglected Indian craft of wood-turning. The toys are made using local resources in the village of Etikoppaka in Andhra Pradesh. Traditionally, the craft of making wooden objects has been practiced since 300 BC. However,  post Independence, lack of demand and low prices in the local markets threatened critically the sustainability of this industry. The tools are simple and through skilful craftsmanship and apprenticeship, beautiful objects are created. Through ‘The Pea Family’ of toys, the artist hopes to benefit this traditional art.