Ilyas Ahmed, an artist from Bengaluru, is giving new life to scrap metals by transforming nuts and bolts and spare parts into enthralling animal sculptures.

Not many people give a second look to metal spare parts lying around. Ilyas Ahmed on the other hand saw the artistic potential of the innocuous nuts and bolts and springs and began working with them in his teenage years. He further honed his skills when he joined Hindustan Aeronautics limited (HAL) as a welder at the age of 19. His next job at Maersk Oil led him to spend a lot of time offshore on the rigs, where he also found ample scrap lying around. This pursuit resulted in the creation of spectacular animal sculptures, from ferocious lions and powerful metallic horses with chains for tails to little squirrels holding peanuts in their hands. Mumbai’s High Street Phoenix and Palladium malls are currently exhibiting six sculptures made by Ilyas Ahmed. They will remain for public viewing till 14th October, 2015.

Ilyas Ahmed’s sculptures may be made of junk materials but their final forms are majestic and display a sense of balance, symmetry, proportion and even the choice of components often resemble real parts of the anatomy. He has crafted intricate table-top models as well as large imposing sculptures that can measure up to 10 feet in height. He has to his credit over seven solo and joint shows/exhibitions in Mumbai and Bangalore.

In the past High Street Phoenix has handpicked artworks such as the award winning sand sculptures by cancer survivor Simon Smith to works by illustrious artists like Shilpa Gupta and Lekha Washington. “High Street Phoenix has established itself as a house of art and entertainment for its customers. We are overwhelmed to bring the best and the most unconventional art forms in the country to our patrons,” said Mr. Rajendra Kalkar, President (West), The Phoenix Mills Ltd. 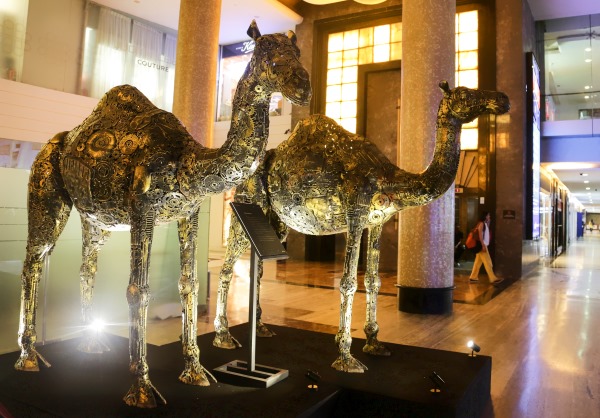 While this display of works in Mumbai by Ilyas Ahmed will only remain for a few more days, folks in Bengaluru can view one of his most elaborate creations – a Native American with a chiseled face, regal headgear, metallic costume and holding a weapon in one hand – at Golf Eden, Mysore Road, Bangalore.