Foodie Ravi Handa writes about his experience at the newly opened restaurant at Citrus Hotel in Pune.

Punchin as a restaurant tries really hard to be different from the traditional mould, especially considering its counterparts in Pune, and succeeds brilliantly at it. Punchin is the new Punjabi Chinese restaurant that has opened up at Citrus Hotel in the Pimpri Chinchwad region, bang opposite to the PCMC building. Finding it should not be an issue. And if you have not realised by now, the name Punchin is not a pun on the word “Punching” but a portmanteau of PUNjabi and CHINese.

As soon as you enter, you are greeted by a Royal Enfield Bullet on the right and a drawing of Stapoo (you might know it as Chindro or Kidi Kada) in the front. The bullet does the job of setting the ambiance perfectly. This is not the first time I have seen a Bullet inside a restaurant as a part of decor, but probably the only one in Pune. As far as the stapoo is concerned, I personally found it cute. I never played it as a kid but have seen enough to know that the numbering drawn at Punchin is wrong. Or maybe it is intentionally wrong in a bid to be different. Or maybe it is done that way so that some enthusiastic kids don’t start playing. Or maybe I am just too old to remember it properly. I would love it if one of you Stapoo experts from the yesteryears can go there and verify the same. Jokes apart, if there is a restaurant which has tried hard to give its patrons a good ambiance, it is Punchin. It manages to communicate the same within seconds of making an entry.

You are greeted with a welcome drink which comes in a small measuring cylinder in two variants: veg (non-alcoholic) and non-veg (alcoholic). I could never understand the phenomenon of classifying non-food stuff as veg and non-veg but we live in a world where some uncle on installing WhatsApp would have sent you a message, “Oye! Joke bhej kuch. Non-veg waale.” Please tell me it wasn’t just me.

The seating is quite spacious and comfortable. Although, I think some people might have an issue sitting next to the open kitchen. The background music is loud but then again – what else would you expect in a restaurant working hard to be “Panju” in the land of the Marathas. 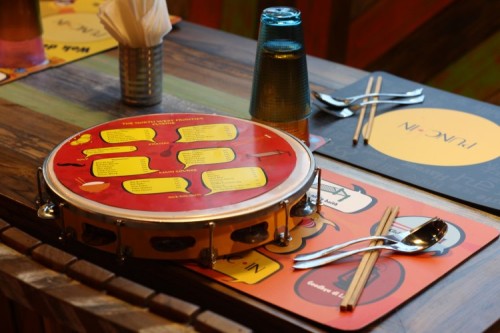 The one thing which was different than usual and I really liked, was the menu. The food menu is printed on a dafli (tambourine) with one side dedicated to Punjabi food and the other one to Chinese. This does restrict the amount of food choices that they offer, but the options available are more than enough. The drinks menu is served on – guess what – a bottle of Old Monk. Seeing the Old Monk bottle was the “had me at hello” moment for me. Before I could decide on which drink to order, the bartender spoke to my wife and got a special pink cocktail which once again came in a measuring cylinder. This time, the measuring cylinder was big – really big. Not wanting to experiment with whisky in the fear that I might have to drink it from a volumetric flask, I decided to stick with good old beer. Punchin does not have anything on tap, which is kind of a downer. Probably this is something that they should fix before the numbering on the Stapoo court.

Coming to the food, the choices are limited, but nearly every item that I had on the menu was really well made. From the starters, we tried Basil Paneer Tikka, Chicken Tikka Kalimirch, and Pind Di Raan. While the Paneer Tikka and Pind Di Raan were really, really, good, I am willing to bet the hair on my head that it would be hard to find a better Chicken Tikka in Pune. It was so good that I was cursing myself that why had I promised to the review. If I hadn’t, I would have just eaten the Chicken Tikka all night. It was so good that I will definitely go there in near future and just have Tikka and beer. It was so good that I will once go there alone and kiss the chef, which I could not do because I went with my wife. On a side note, if you do get the opportunity, try and meet the chef – Maruti Mishra. He has an extremely pleasant personality and will make you feel guilty for not having enough food even though your stomach would disagree. My initial plan was to have both Punjabi and Chinese dishes but the Tikka convinced me to forget “Hindi-Chini Bhai Bhai” and stick to “Saada Punjab”. I had Butter Chicken and Amritsari Daal as a part of the main course. They were pretty good as well, but sadly I was already stuffed with the starters. 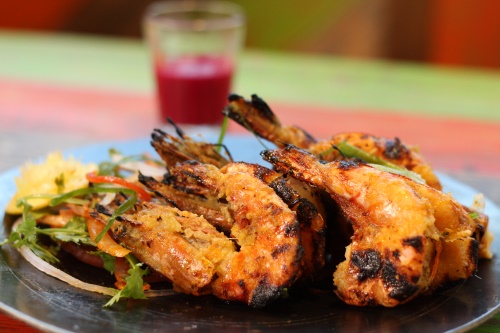 A good evening ended on a slightly damp note. In dessert, they recommended that we try the Fried Ice-Cream. It sounded like something that would come with all the guilty pleasures known in the world and Satan would later punish me for it but it was disappointing. I like fried food and who doesn’t like ice-cream but probably mixing them isn’t such a good idea.

Let me add, during the meal the music got really loud and the entire staff formed a train and danced to it. One couple who was sitting there joined the train and danced with them as well. There are people who enjoy stuff like this but I have never been a fan of live music or dance or magic tricks or bird calls (yes – that has happened) next to the table where I am eating. There should be a stage and such activities should stick to the stage. In a bid to provide some sort of personal experience, such activities often end up annoying the customer. Thankfully, the staff at Punchin was smart enough to form a train and not stick to a particular place. I still can’t fathom how or why the couple joined them. But then again, people voluntarily jump from planes these days.

Overall, it was a great experience and I will definitely visit Punchin again. If you see a person sitting in a corner with four plates of Chicken Tikka and looking really happy, come say hello. I would like to meet you too.

Ravi Handa is a Pune based foodie who runs an online CAT coaching and CAT preparation course. You can also read Ravi’s review of the Sunday Brunch at blueFrog Pune here.