The Spanish restaurant at JW Marriott, Mumbai, is hosting special musical weekends this month. LifeSpice was invited to review the place, so our Editor Anu Gulmohar picked up her pen and book and hungrily devoured the Arola experience. 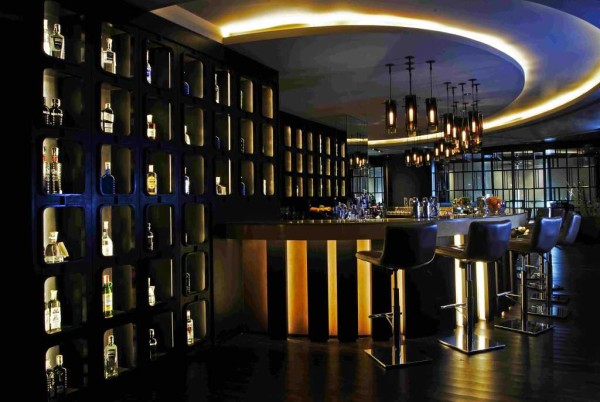 Arola at JW Marriott has been serving Spanish delicacies to Mumbaikars since nearly three years. Jazzing up the restaurant is their fusion music nights, titled Arola Musica, in which local and international DJs are teaming up with percussionists to perform live before the diners on every Friday and Saturday of this month. I was invited by the restaurant to experience an Arola Musica night, and so I reached on 17th January to sample their food and enjoy music by Christ Burstein and Rohin Puri.

The ambiance of Arola is very sophisticated, as expected, and chic with no Spanish clichés of bulls or flamencos. As I sunk into the comfortable but rather low sofa, melodious music played from the speakers, and I eagerly looked forward to witnessing the live performance by the artists. Arola has a rather fancy iPad menu, where upon selecting any dish, it shows a magnified view of the dish along with its description. So, you know exactly what you are ordering. In my case, I was happy to let the Chef present anything he willed and course after course, I felt immensely satisfied with this decision. 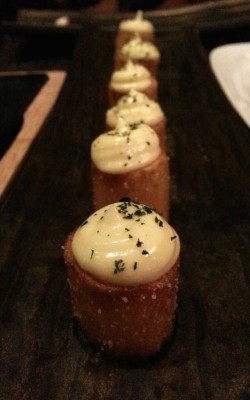 First I was served toasted breads, which was accompanied by garlic cloves cut in half, tomato paste, rock salt and olive oil. I was instructed to rub the garlic over the bread and then top it up with the rest. Upon finishing this ritual, I took a bite. While the bread was pleasing to the palate, I couldn’t taste the garlic much. So for the second piece, I rubbed the garlic on with gusto, and succeeded in a stronger, yet subtle, flavour.

In traditional Spanish manner, a variety of tapas was served in the evening. I was served lobster ravioli in a light sauce, which had a delicately exquisite flavour. Patatas Bravas were beautifully presented. Essentially fried potatoes, crowned with a dollop of cream and sprinkled with salt, they were a delightful version of the staple Spanish tapas. The coca (Spanish for pizza) with olives and ham on top was quite good, except for one extra chewy piece of ham that I wasn’t too happy with. The Chicken salsitas were like really tender chicken wings with a melange of feisty flavours. Garnished with sesame seeds, chilli and garlic it was at once spicy and sweet. Then there were the prawns. Usually always accompanying a main dish, here they were the sole heroes. Slightly crisp with a hint of garlic, they were so light and delicious; I finished off every one of them! 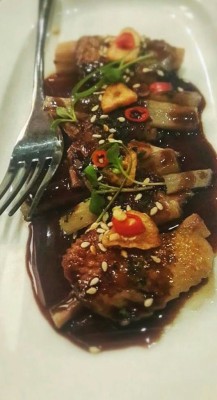 However, I believe their dessert was the highlight of the entire meal. I found a hint of caramel on top and as I dug into the foamy texture I discovered its tangy mandarin heart. The biscotti at the bottom supported the flavours beautifully. Named Creama Catalana, it surprised me layer after layer and kept me hooked till the last bite. 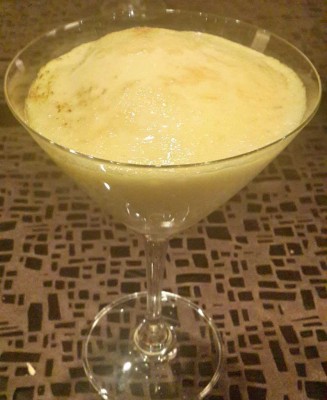 Among their drinks I tried their Sangria, which came in a long glass garnished with a slice of apple. I found it a very safe take on the drink and personally prefer a zestier version. The hostess suggested that I try the Rui Naranja, which was an orange juice based drink. A tad bitter on the palate, it’s for folks looking for a headier cocktail.

In the middle of the evening I asked the hostess when the live performance would begin. To my surprise she replied that the music I could hear from the speakers was being played live at another part of the restaurant. The music had been so consistent that I had a hard time believing they weren’t playing a CD! So the music was great at Arola Musica, but when you decide to go, do ensure you are seated near the performers so you can get a better feel of the live act!

The artists performing this month at Arola Musica are as follows: