William Penn presents AP Limited Editions that should gladden any Hindu’s heart. Inspired from Hindu mythologies and depicting Gods such as Krishna and Shiva, each of these hand-crafted pens have a special story to tell.

Caran d’Ache collaborated with renowned Swiss jeweller and artist, Edouard Jud, to produce The Limited Edition Shiva, the latest addition to the Artiste Collection. Handcrafted in 800 solid silver with a distinctive finish, these pens are made in honour of Lord Shiva and evoke the mystery and symbolism associated with the deity.

The pen’s cap is crowned with an agate, a semi-precious stone chosen by Caran d’Ache for its intense blue to represent the colour of Shiva’s skin. The personification of the Absolute, Shiva is portrayed in several representations of his destructive and regenerative power. The third eye of Shiva is depicted with an engraving on the writing instrument. Shiva Nataraja, the cosmic dancer, is seen moving to the rhythm of Shiva’s damaru.

A tribute to the Lord of The Seven Hills, the Sailor Sri Venkateswara AP Limited Edition pen is an artistic masterpiece. Hand crafted by famous Japanese Maki-e artist, Kousen Oshita, each pen is urushi lacquered – an ancient Japanese technique – and then Lord Venkateswara’s image is hand painted with real gold, silver and abalone. Hands drawn on the lower portion of the cap are the seven peaks, representing the seven heads of Adisesha – the cosmic serpent.

The symbols associated with Lord Venkateswara – the Shanka, the Chakra and the Namaam – are depicted on the cap of the pen. Its nib is of 21k gold, engraved with the Namam. The pens are individually numbered and limited to 108 pieces. They are priced at Rs. 3.45 lakhs per piece. 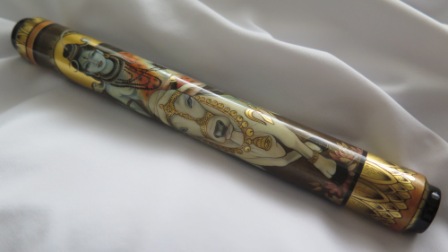 Other AP Limited Edition pens include The Almightly Shiva, Vishnu Lakshmi and Krishna. You can purchase these beautiful limited edition pens from William Penn.