Italian company Montegrappa is famous for manufacturing writing instruments and watches. The company has a history of producing exquisitely crafted objects that are designed in the most amazing fashion. Recently, the brand launched four new pens, each with a unique story to tell…

A pen to treasure 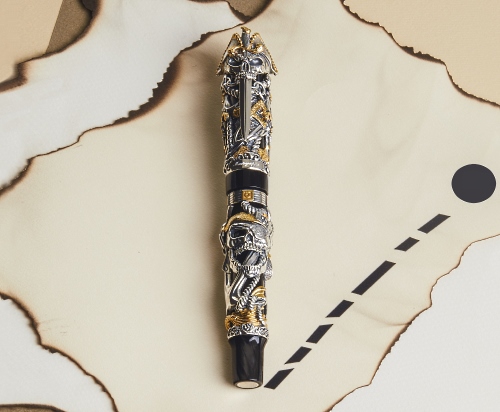 The pirates have become one of the most likable villains in recent times with films like The Buccaneer and The Pirates of the Caribbean series achieving worldwide success. The Pirate pens by Montegrappa are an ode to one of the most notorious pirates of all time, William Kidd. It is believed that he had buried nearly 400 tons of gold treasure in various parts of the world. This could be the reason why this limited edition Pirate writing instruments by Montegrappa is limited to 399 fountain pens and 399 roller balls in silver, and nine of each in gold.

Made either in a charcoal black celluloid and a die-casting Sterling Silver or a Solid Gold barrel and a cap, Pirate pens are finished with intricate details. The shining metal body has the famous “Jolly Roger” sign with grinning skulls and bones engraved on it. The cap top looks like it is made out of a pirate’s hat and the pen’s signature clip is adorned with a sword. Further decorated with ropes and chains, the Pirate writing instruments also feature guns, treasure maps and ships in full sail.

The nib of this elegant pen is available in three writing grades of Fine, Medium and Broad and it is made up of 18 k gold. Each Pirates instrument comes in its own “treasure box” that is designed with red lacquered wood and striking black interiors. 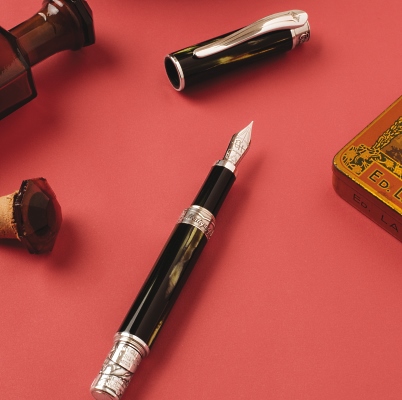 Montegrappa often dedicates their pens to honour great masters who influenced the world with their art, philosophy, politics or other passionate works. Mightier Than the Sword, is one such tribute to the most inventive and influential writers of all time, Ernest Hemingway. Trivia for you: Hemingway, the great reporter and novelist, was known to write with Montegrappa pens.

The writing instruments introduced under the Hemingway collection includes four different editions, “The Soldier”, “The Writer”, “The Fisherman” and “The Traveller”. Each category tells a story about that particular part of the author’s life and is offered in three different types – fountain, roller and ballpoint pen. Each model is limited to 100 pieces, totalling 300 pieces per subject. Produced in celluloid, the pens feature Sterling Silver trim, except for 10 pieces of each type that instead are trimmed with 18 k gold.

A pen to raise a glass to! 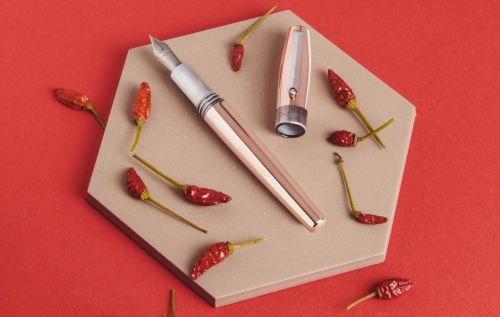 Grappa is the local drink of the area which was home to the oldest pen manufacture in Italy. The tipple has never been more popular, finding home in new bars and lounges from all over the world. Montegrappa has honoured the locals’ favourite beverage for the second time following the success of the limited edition Grappa pen in hammered copper, by launching Montegrappa Mule, a pen that is designed keeping both the drink and the equipment used to distill it in mind. The cap top bears the “1912” logo, while the nib is decorated with filigree Montegrappa pattern. Mirror-polished copper is used to design the cap and barrel, which is reminiscent of the vintage piping and tubing used in the process of producing Grappa. Each Montegrappa Mule will acquire its own shape over time through handling by its owner, thus personalizing the writing instrument more to suit each owner.

Available in three different versions, fountain, roller or ballpoint, the Montegrappa Mule will easily fulfil each user’s wishes. Its nibs are available in Fine, Medium and Broad form and the fountain pen includes an extra cartridge or converter for carrying additional ink. Further enhancing the connection between the pen and the drink will be a copper mug given to buyers of first 500 Montegrappa Mule pens. The mug will be personalised with a special Montegrappa Mule logo.

The symbol of good times 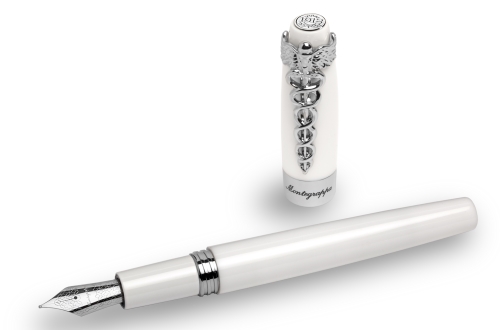 Inspired by its style and message, Montegrappa’s Fortuna range has inspired a lot of its owners by its timelessness. The message invokes positivity, good fortune and especially the best of health. Drawing inspiration from this, Montegrappa has introduced a new Fortuna pen that celebrates those who ensure the well being of others. Fortuna Caduceus takes its name from the symbol that represents the medical profession on a global basis after its adoption by the US Medical Corps.

The most significant detail of the pen is a palladium pocket clip in the form of Caduceus. The actual shape and the structure of the pen is unique and beautiful featuring a rod embraced by two intertwined snakes and wings. The symbolism of this particular design has led to many interpretations associated with resurrection and healing. Among ancient Greeks and Romans, the Caduceus became a badge of ambassadors and heralds, while in the modern times it is used to represent physicians and even pharmacies.

Made of a white resin and featuring palladium trims, the Fortuna Caduceus represents health and purity. The cap top is engraved with the 1912 logo, while the nib is inscribed with the Montegrappa filigree pattern. It is offered in three versions, fountain pen, roller and ballpoint; the fountain pen is available with Fine, Medium or Broad nibs and comes with a cartridge or is converter-fed.

Where to buy: You can find Montegrappa stores at DLF Emporio, New Delhi and Palladium mall, Mumbai.