Former Mrs. India, model and designer Shilpa Reddy is in New York today, showcasing her Floral Geometry collection at the Jessica Minh Anh show in New York and will be in Mumbai on 22nd March for the Lakme Fashion Week. Find out more about this talented designer here. 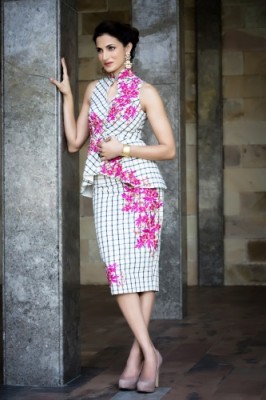 This is a busy weekend for former Mrs. India, model and designer, Shilpa Reddy. Selected last year for Minh Anh’s J Autumn Show 2014, she became the first Indian designer to showcase her collection at the Eiffel Tower in Paris. Today, she participates in another unusual and exotic fashion show by Jessica Minh Anh where the ramp is on a glass boat over Hudson River in New York, and in the backdrop are iconic structures like the Brooklyn Bridge, Statue of Liberty and One World Trade Center. On Sunday, 22nd March 2015, she will be in India to showcase her Floral Geometry collection at the Lakme Fashion Week.

Shilpa’s designs use quintessential Indian fabrics, which are styled to match the palate of NYC’s fashionable set. Her collection highlights the beauty of geometric Ikkat and blossoms of spring, and features traditional Pochampally weaves. The century old technique of Telangana Ikkat or tie-and-dye pattern requires colourful threads to be intricately woven on traditional looms by skilled weavers. Shilpa also designs footwear to match the outfits.

“I want to let the city (New York) know that ethnic Indian fabrics can find their way through western designs. I had promised myself that whenever I showcase my work internationally I will make it a point to depict pure and authentic Indian materials,” said Shilpa Reddy.

A fashion graduate from the Academy of Design, Toronto, Shilpa had won the Gladrags Mrs. India contest in 2004. She has also previously featured in the Kingfisher Calendar. She is also a health and fitness columnist and actively participates in social causes such as Breast Cancer Awareness, Danutsav and Hariton-Green run. She is the brand ambassador of ‘Roshni’, an organization for mental health.

You can find out more about Shilpa Reddy from her website.