Designed by Porsche Design Studio, the C SEED 201 is the world’s largest outdoor LED TV that takes only 40 seconds to launch itself from under the ground and transform into a 201 inch television. 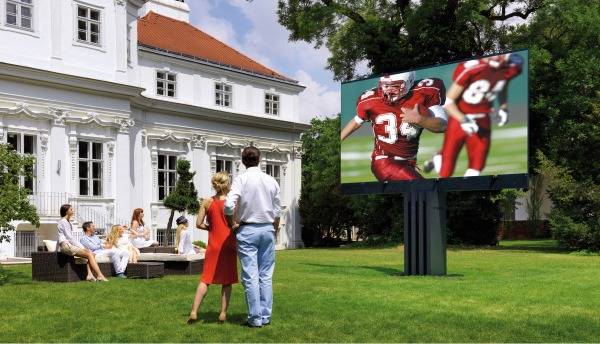 The C SEED 201 raised the standard of high-end outdoor entertainment when it was launched in 2012, and its record as the world’s largest outdoor LED television is yet to be bettered. Perfect for your backyard, the TV is stored within a shaft in the ground rather inconspicuously. At the touch of a button, C SEED 201 swiftly launches from the ground and reaches its full height of 15 feet in 15 seconds. Seven panels silently unfold and interlock to form a seamless screen that comes alive with ultra-high-resolution-images in 281 trillion radiant colours. You can then enjoy HDTV, Blu-ray movies, sporting events, or golf on a gaming console. When the show is over, C SEED 201 quickly retracts back into the ground.

C SEED 201 is fully daylight-compatible. It has a high-fidelity 3-way outdoor audio system including 15 speakers. Its height is adjustable up to 15 feet and the screen is 270-degrees rotatable. Also, if it begins to pour, there’s no need to worry as this outdoor television is waterproof.

Conceived as the “seed” of future outdoor entertainment, this soaring monolith was conceived by Alexander Swatek and Edouardo Saint Julien-Wallsee, who had already created a successful LED screen company, Global Bright Media, for prestige events like the Cannes Film Festival and Formula One races.

A high-tech sculpture, the giant outdoor television offers elegant minimalism with crowd-pleasing performance. The sleek and functional C SEED 201 was honoured with the “red dot: best of the best 2012” award for product design.

This unique masterpiece is now in production in limited numbers for a discerning global clientele. To connect with them, click here.