Moksh Eshpuniyani finds out if the new Audi TT is truly ‘out of this world.’ 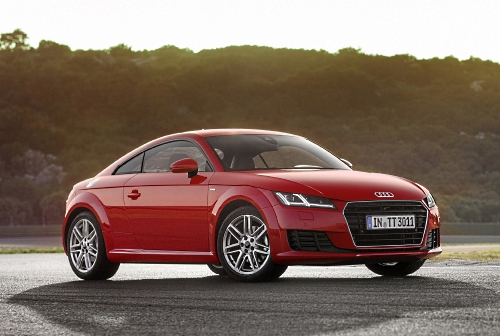 Yes, I have seen the new Audi TT fly down from space to the earth several times now. I do watch a lot of prime-time television, so it is hard to miss the new advertisement by Audi. It is a very well made video and does the job of grabbing attention perfectly. However, if you were convinced somewhere in your head that the car brings to the road space-age technology, then the next time you see the video, think of it as pure entertainment.

I remember very well when the first generation TT was launched in India. A lot of people don’t remember the first generation in India because at its launch here, it was almost at the end of its lifecycle. Also, limited footprint and marketing budget of Audi in India back then meant lesser awareness of the products. But people who knew about the car, loved it for its attractive price and fresh design. I always felt it was a car for the richer group of the fairer sex. It was dull to drive but very well built, curvy, rare and cute to look at – which is why it mostly never found space in the garages of men! Yet we all secretly loved it. The second generation came with a better kit to complement the styling. The car was also thankfully more unisex in its design.

If the first question that comes into your head is how the new TT looks upfront, then let me tell you it is not hard to identify. Yes, it has evolved since its global release in 1998 and looks more aggressive and sharper than ever before, but it is still instantly recognisable. The length of the car is almost unchanged. It has lost about 50 kg thanks to better use of aluminium. There is better weight distribution and Audi has worked hard to take the front-heavy feel away from the car.

The big highlight of the new car is its interiors that ooze quality from every inch. The focus of the interior is around the 12.3-inch driver display, which replaces the conventional speedometer console. There is no MMI on offer, which is also replaced by the Virtual Cockpit screen. Nearly every function can be handled by the screen. There could be practical issues of visible controls being out of reach for co-passengers, but in the department of coolness it hits the bull’s-eye. It is an absolute joy to use and the graphics are fantastic. Another cool detailing is the AC control, which is digitally displayed by the AC vents. In terms of space, the car is practically a 2-seater, despite the 4 seats configuration. You can use the rear seats for very small children only.

In terms of driving dynamics, the new TT has changed a lot of its characteristics. The car feels sharp to drive, handles much better and is eager to change directions. It is what you expect a 2-door coupe to do. The heavy nose feel is almost gone in the new car. The Quattro (permanent-all wheel drive) is integrated with the Audi drive select. This combined with the altering engine and steering characteristics give a more noticeable difference in the driving modes (comfort, auto, dynamic, efficiency and individual mode). In the comfort mode the car rides significantly better over the previous generation. This improves the usability in everyday conditions drastically in a country like India. The engine is the same 2.0 TFSI, which produces 19 bhp more than its predecessor. It isn’t a heavy number to boast, but because of it the quick double clutch gearbox does a respectable 0-100 in claimed 5.3 seconds.

The Audi TT as an overall package is more appealing than ever before, the vastly improved interiors and dynamics add a lot of value to the iconic TT. But, in the last decade, the TT has seen a price increase of over INR 30 lakhs. This will affect people with a sharp memory! But, then again, there is no true alternative for a 2-door coupe at this price and BMW Z4 and Mercedes SLK are differently engineered and about 15 lakh rupees more expensive. Also, the improvements justify the price to some extent and we must not forget that it does take a lot of money to film cars dropping down from space to our planet!

You can book a test drive of the TT from here.