Makers of luxury timepieces, MB&F have collaborated with L’Epée 1839 to create Sherman, the robot, who’s meant to be an office companion that also tells time. 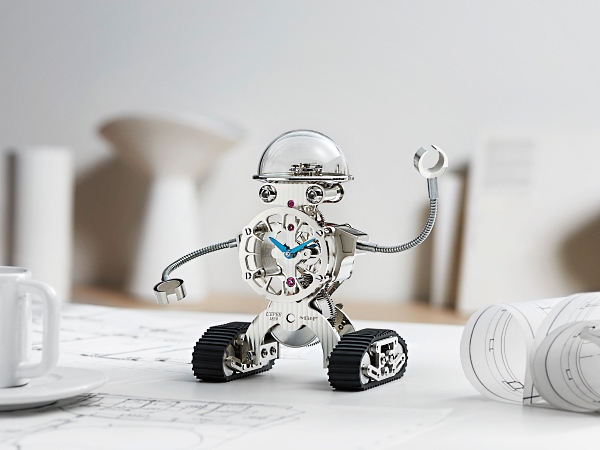 Swiss watchmaker MB&F may have set up shop only about a decade ago but they have quickly gained fame for their avant-garde timepieces. There’s nothing usual about their designs and founder Maximilian Büsser has often sought inspiration from pop and science fiction. A fan of the film series Star Wars and the droid R2-D2, Büsser had wished for a robot companion since his childhood days. Thus grew the idea of developing their latest watch, which is in fact a robot, named Sherman.

Unlike more techie robots, Sherman doesn’t talk or walk or vacuum the floor, but instead he tells the time and makes people smile! Founded on an in-line 8-day movement by L’Epée 1839, this table clock has a dial on his chest and displays time accurately for a week before requiring to be wound again.

Sherman’s head is made of transparent mineral glass, which allows people to see his mechanical brain. This is where the regulator that controls the precision of the time is placed. This is also where the Incabloc shock protection system is housed, which minimises damage to Sherman when he’s being moved.

Sherman’s arms can be moved easily and can even hold items like pens or his own winding key. His caterpillar tracks are made of rubber and with a little push from his human friend can easily traverse the treacherous terrain of an office desk! Take a look at this adorable robot in the video below:

Sherman, the robot, is a limited edition model and is offered in three different bodies – palladium plated (200 pieces), gilded gold-plated (200 pieces) and diamond-set gilded (50 pieces). To learn more about him, click here.

Interested in reading about other fantastic robots? Click here to read about Botlr, the robot that has replaced butlers at Aloft Hotels!