Lifespice The historic Alfa Romeo, gifted by Mussolini to his mistress
x

The RM Auctions’ Paris sale in February, 2015 features the historic Alfa Romeo 6C 2500 Sport Berlinetta by Touring that Mussolini had presented to his lover, Claretta Petaccito. 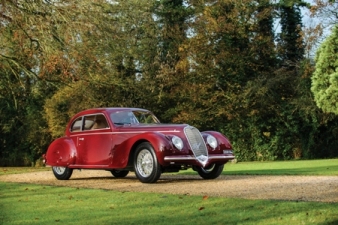 Vintage cars are often auctioned for hefty sums, but soon going under the hammer at RM Auctions’ Paris sale, is an Alfa Romeo 6C 2500 Sport Berlinetta by Touring with a rather unusual and exciting past. While any pre-war car of such make is highly prized today, this particular one was gifted by the Italian dictator Benito Mussolini to his mistress Claretta Petacci! The sale is to be held at Place Vauban during the Retromobile week, 3-4 February, 2015.

The notorious war-time dictator, Mussolini enjoyed the finest luxuries of his time. He picked for his lover, Claretta Petaccithe, the Alfa Romeo 6C 2500 Sport Berlinetta, chassis no. 915033, which had rolled off the production line in 1939 with stunning coachwork by Touring. In those days this car was popular for its stunning looks and ace performance. Mussolini gifted the Alfa Romeo to Petacci for her personal use during the war days. It was chauffeur-driven by Franz Spögler, who also confirmed the identity of this historic Alfa Romeo post war.

As per Spögler, this Alfa Romeo was the very car in which she took her last journey. Petacci and her family members had driven in a convoy from Milan to find refuge across the Italian border in 1945. They were stopped by partisans near Lake Como. Hers and Mussolini’s fate is well known to all.

“Few cars that have passed through our hands have had quite the important historical context that this Alfa Romeo can boast,” said Augustin Sabatié-Garat, Car Specialist, RM Auctions Europe. “It played a role in one of the most important moments of the Second World War, and is a fascinating footnote in 20th century history. That it is also one of the most desirable of all pre-war Grand Touring cars and beautifully restored by the world’s leading marque expert, makes it an unbelievable prize for any serious collector.”

Other impressive vehicles at the auction are:

If you would like to bid at this auction for any of the above cars, follow this link.